On Sunday afternoon I played Mark in a game of Epic. This was my first game in quite some time (particularly if not including Epic: Modern) and I was a little rusty on the rules. In particular my army list wasn't the best. I was fielding the following; 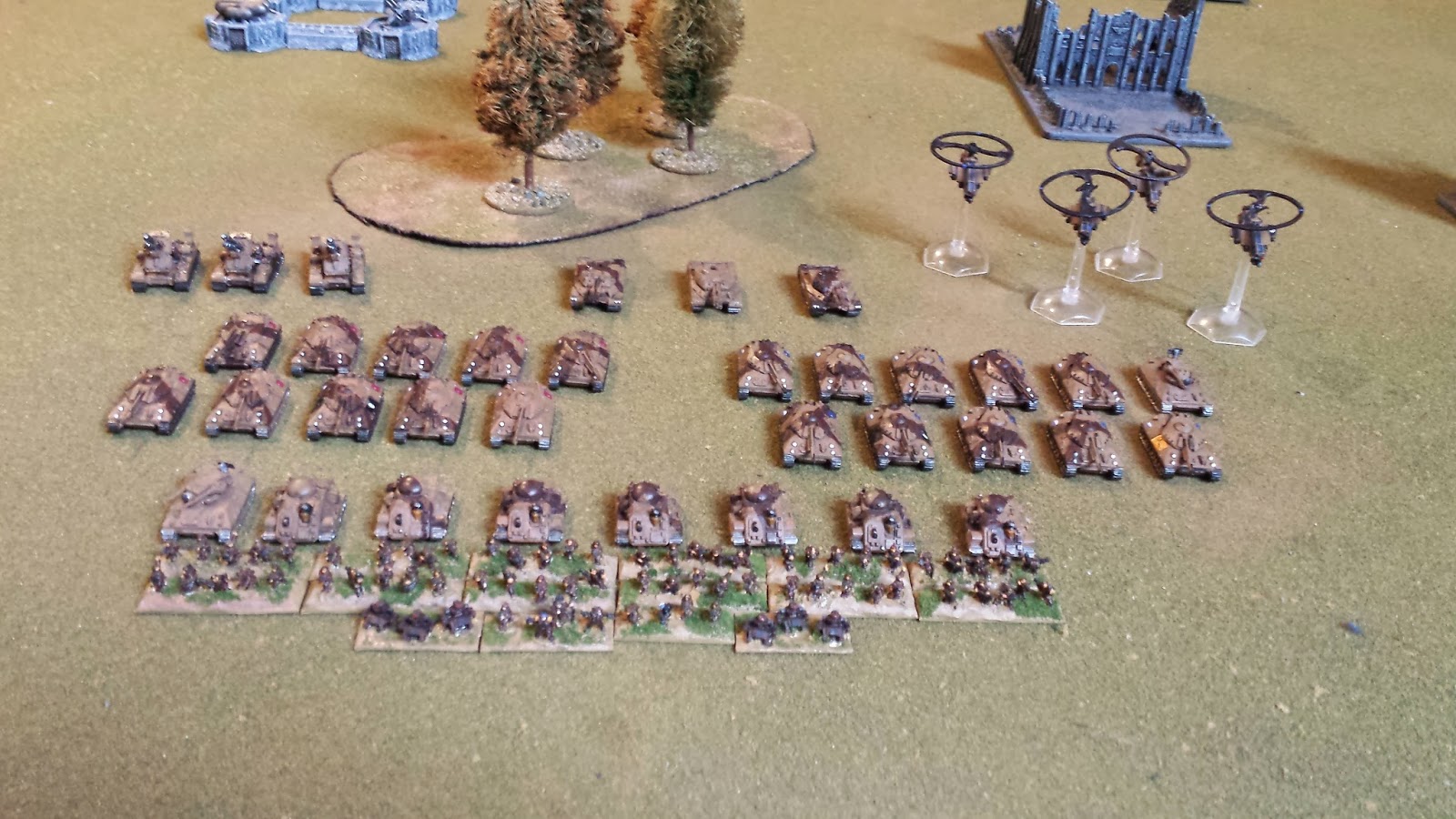 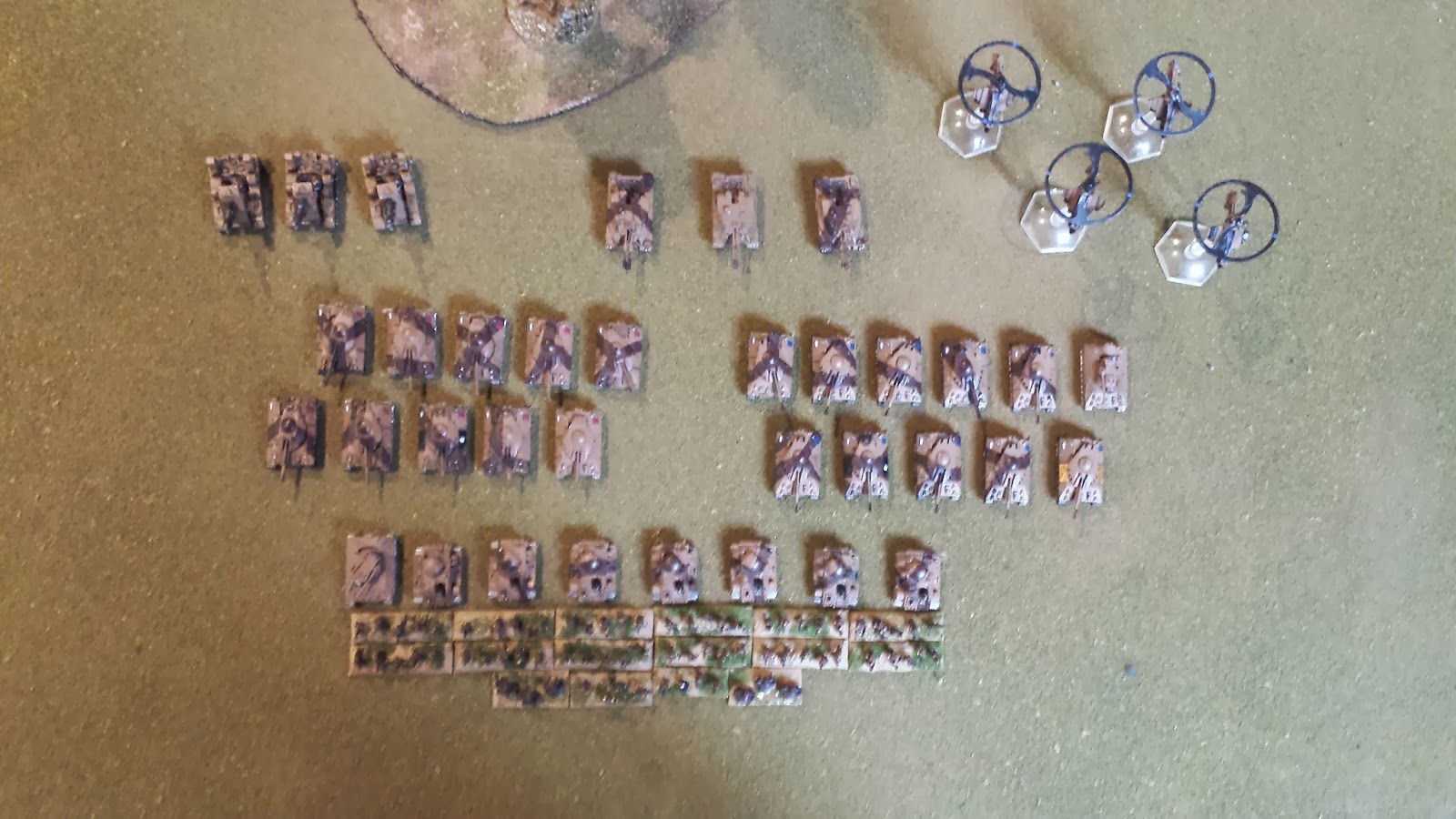 Only six activations in a 3000 point game is a disadvantage. Not a crippling one, but I certainly wouldn't go with any less activations than this, and I'd be more comfortable with 8. In hindsight I should have swapped the Super-Heavy company for two individual Super-Heavy tanks and a unit of Salamanders.

We were playtesting the latest version of the Tyranids army list. The development of the Tyranid list for Epic: Armageddon has been somewhat haphazard (going through several versions, fresh-starts, and parallel developments) and this version is part of an effort to nail down a single accepted and final Tyranid army list. The Epic fan community has developed quite an organised process for approving new lists - a list must have a certain number of (documented) playtest games, conducted by several groups. Mark had been playing a few games with his Tyranids lately, trying different approaches each time. For this game he had gone with an infantry heavy list consisting of the following; 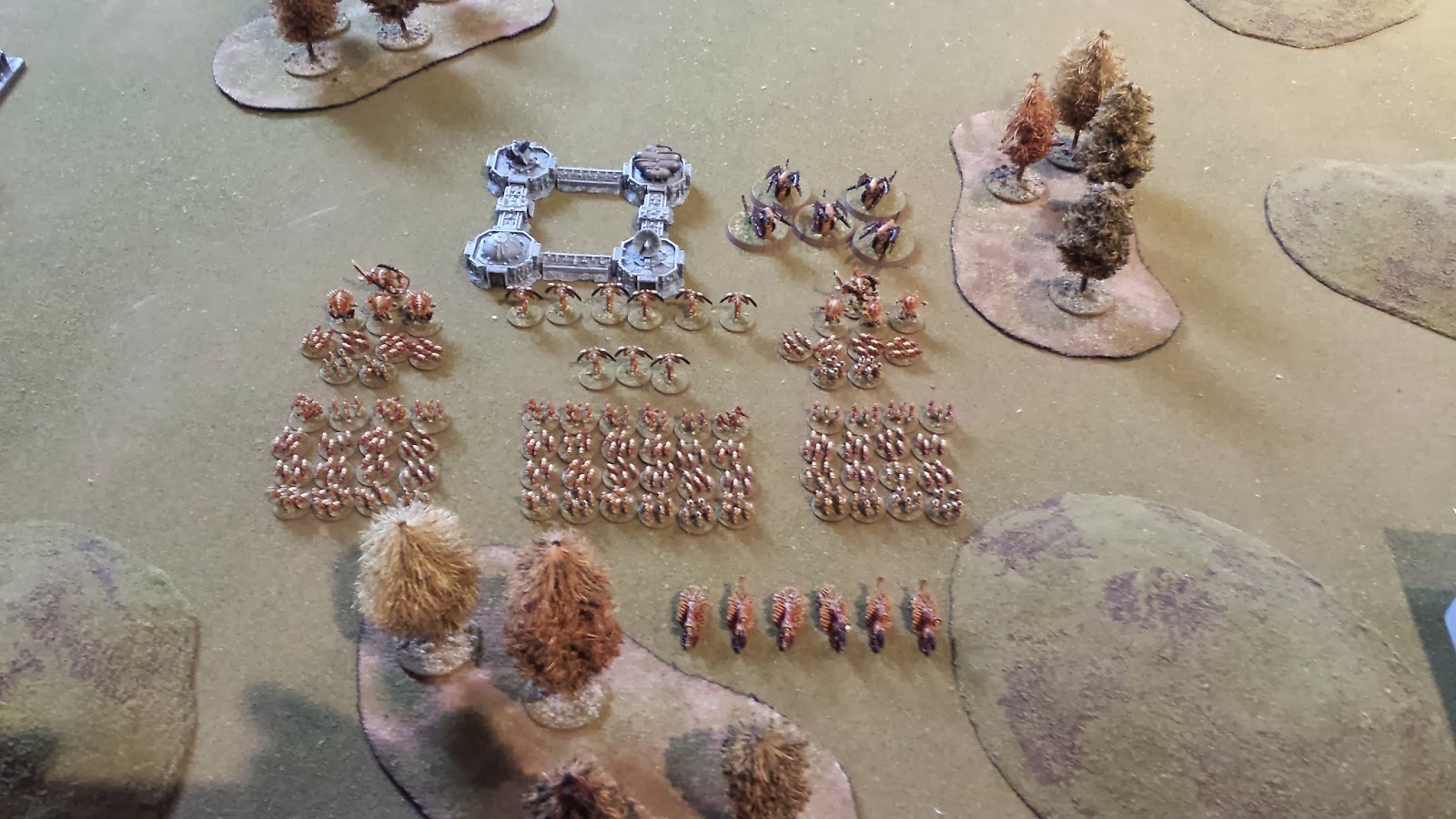 I deployed my Vulture squadron on overwatch, the Basilisks on the Blitz objective, one tank company in the center, and the remainder of the units on my right flank. Mark deployed his units similarly, leaning towards the center and right. 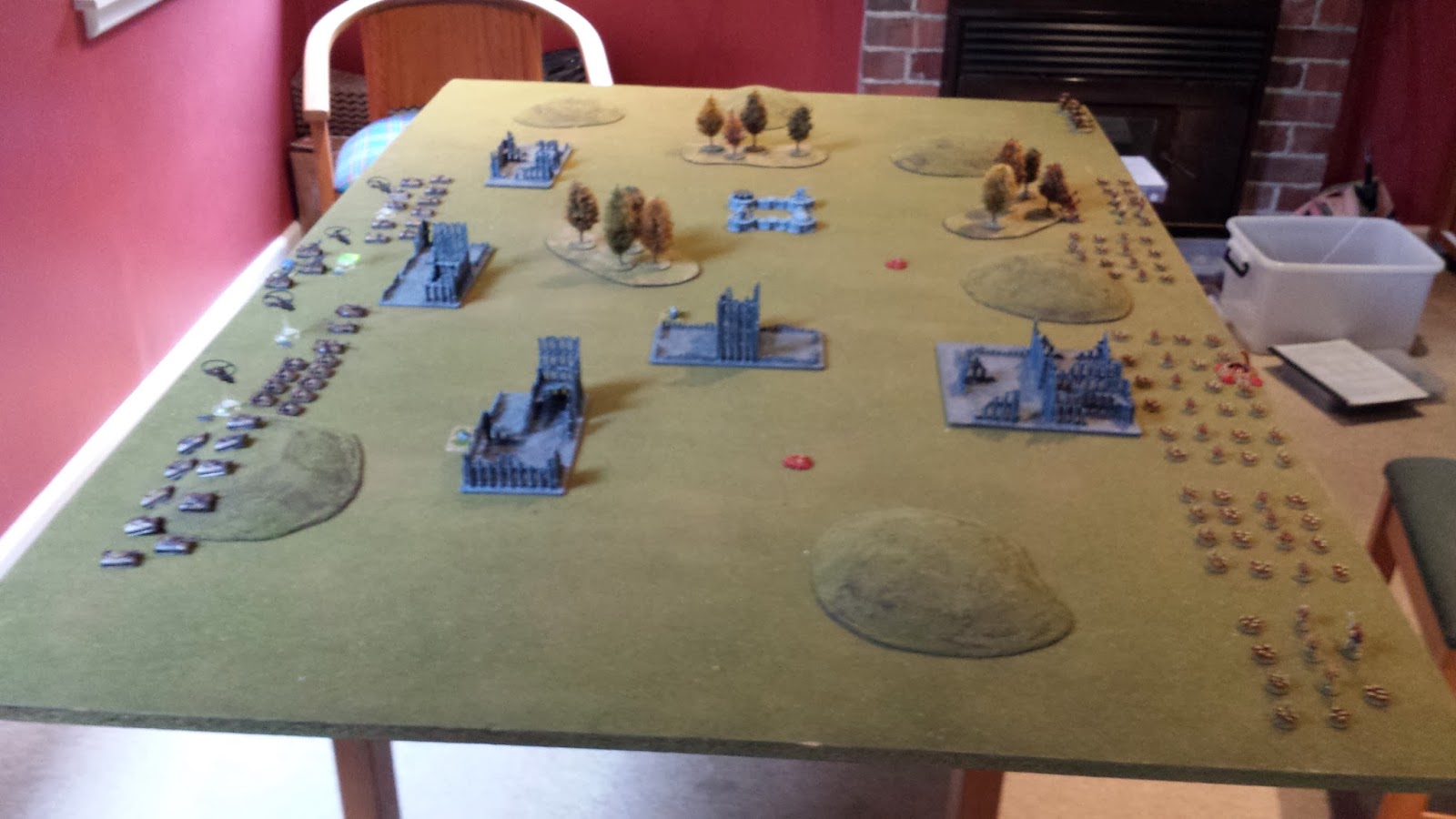 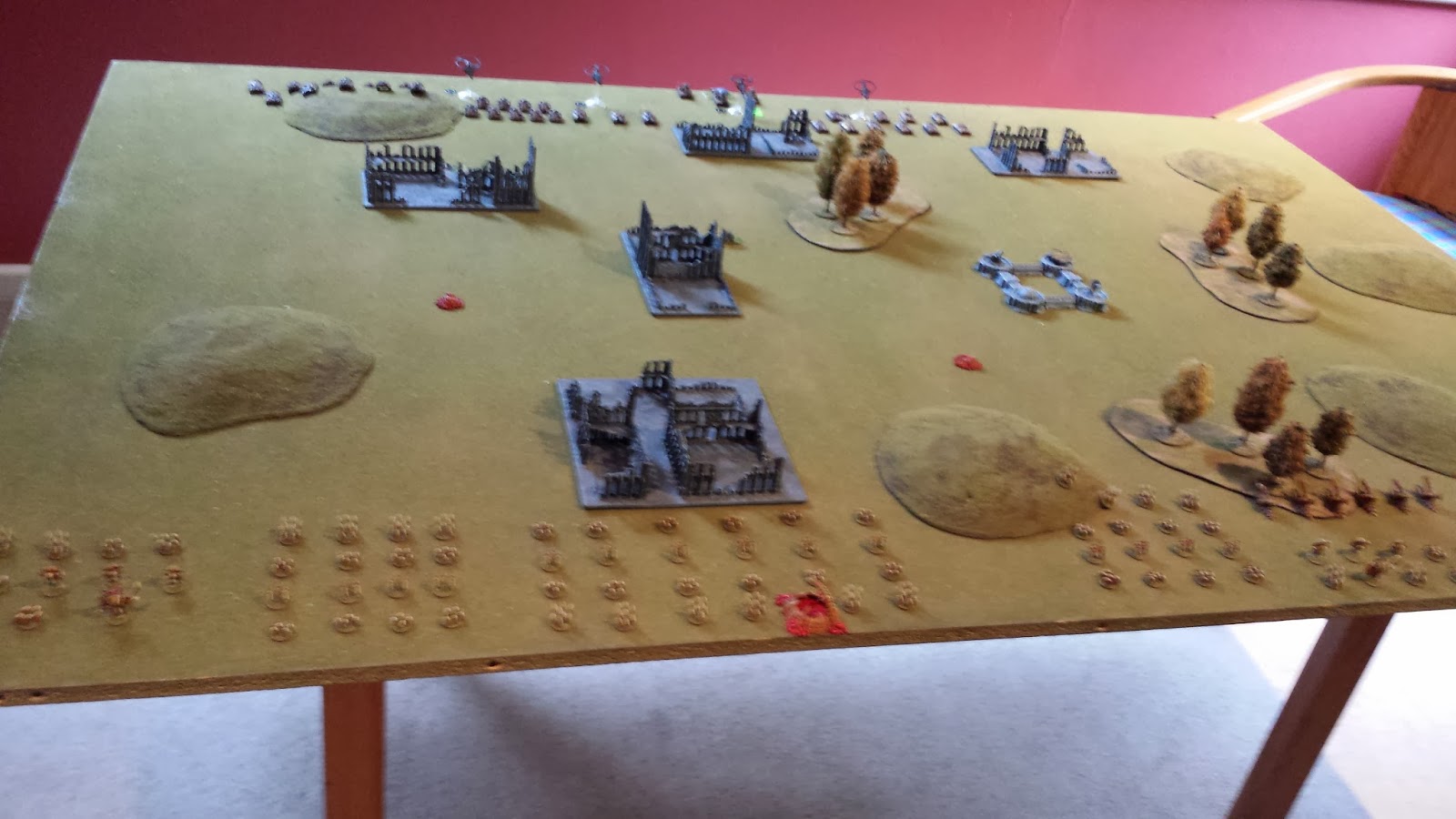 The first turn was uneventful. Mark's army has very little long ranged firepower so I suffered no damage. My units mostly chipped away at gaunts. It was at the end of this turn that I saw the key strength of Tyranid units - they get to Swarm, bringing back dead Gaunts during each end phase. The number they bring back depends on how many synapse creatures they have, with synapses within 30cm of the enemy or broken counting for half. Combined with the Expendible rule (killing Gaunts does not inflict blast markers) Tyranid swarms are quite hard to break with shooting. The trick is to try and inflict hits on the synapse creatures (Warriors and Hive Tyrants), because killing Gaunts achieves very little. 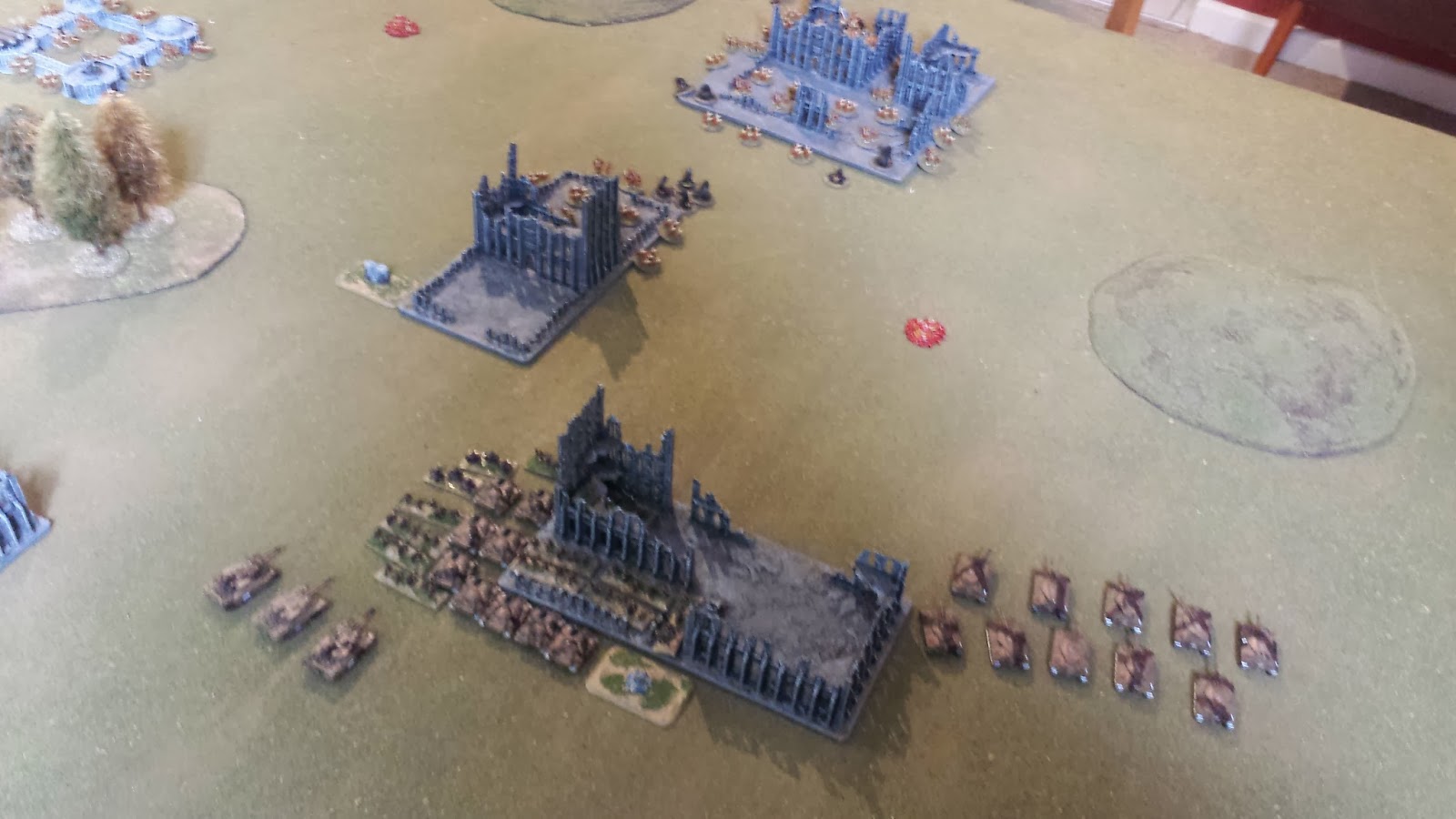 At the start of turn 2 my 1st tank company (also my Break the Spirit unit) was positioned very close to a medium Tyranid swarm. The roll for initiative was a tense moment - the person who acted first could set the terms for the resulting firefire (or run away). Mark won the roll and (after some preparatory shooting and retaining the initiative) the swarm surged into base to base contact. Four tanks and a Hydra were destroyed by Tyranid attacks and the rest of the company was wiped out by the combat-resolution result. In hindsight this was the moment I lost the game. Not only had I lost a 700 point unit, Mark had achieved Break the Spirit, giving him one of the two victory conditions needed to win.

On turn 3 I had slightly better luck. On the right flank my regimental HQ, 2nd tank company, and super-heavy tanks all managed to break Tyranid formations. But it was too little too late. With 1st Tank Company gone I had nothing in the center, and Mark's medium swarm (reinforced by the medium Lictor swarm which had suddenly appeared) easily swamped my gunships and artillery to claim the Blitz objective.


Mark has also blogged his version of the battle.


Overall impression, I quite like this version of the Tyranid list. I have some Epic Tyranid models sitting around, and often contemplated organising them into a usable army. The fiddliness and excessive number of special rules in other versions of the list put me off, but this version strikes a good middle-ground. Only a couple of special rules but it gives a distinct and appropriate feel on the table. In particular I like the way Gaunts and Synapse creatures work. Despite a lack of ranged shooting they are effective, and you get the impression of these infinite swarms that when you kill one another just pops up. But they also have a weakness in that if you can "shoot the big ones" (the Synapse creatures) mopping up the rest isn't too bad.
Posted by Than at 23:30