With the first prototype 3D printed Croft vehicles coming out well, my brother Vaughan ran another batch. So now 9 mostly complete vehicles, plus a couple of turrets and some odds-and-ends parts. 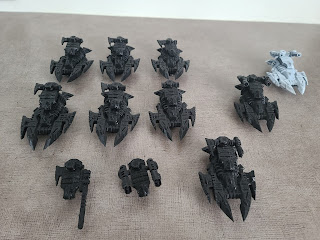 We've produced turrets for four vehicle types - an infantry fighting vehicle, an AA-vehicle, a MLRS, and a tank.

Minor confession, I haven't necessarily used the correct parts for each variant. For example, originally we printed 8 of the AA tanks, which was more than required. So I put a small wing and missile launcher on 6 of these turrets to make 6 of what I'm calling an IFV. Likewise I don't know if the turrets I glued the MLRS launchers and tank main cannon to are the ones they're supposed to have... I just know they come out looking OK to me, and I'll use that combination for any more we print.
Posted by Than at 23:33