This afternoon I played my first game of Battlefleet Gothic in a long time. Much too long apparently, since I had completely forgotten the rules and got an embarrassing number of things wrong.

The battle was 1500 points, using the BFG-R fleet lists. Mark was using an Eldar Craftworld force (using the Dark Realm Kraytonian fleet range), while I was running Chaos (using Ground Zero Games models from their NSL range). We both had very similar fleets – a battleship/heavy cruiser, four cruisers, and two squadrons of escorts each.

We decided to play a Fleet Engagement mission. After a little confusion about how the deployment zones were determined, we ended up with Mark deploying up to 60cm on, with at least one unit in each third of the table. My fleet deployed in a up to 30cm on, with all ships having to be within 45cm of the center of my table edge. Naively, I had this idea that Mark being forces to spread his deployment along his whole table edge would give me an advantage, since my fleet started out massed together. It didn’t quite work out that way.

Mark got first turn. At this point we rolled, and determining that the sun was coming from his table edge. This meant that the Eldar would be at their fastest moving along the length of the board, mid-speed when moving towards my table edge, and slowest when moving back towards their own table edge. Mark’s cruisers to my right pounced on my destroyer squadron, destroying three of the four ships. In the center his heavy cruiser moved into range of my battleship, inflicting heavy damage but not quite crippling it. My return fire likewise almost but not quite crippled the Eldar ship.

Turns two and three were a confused brawl, with every ship on the table packed into a 30cm radius. In the end Mark’s fleet came out best off. They had crippled my battleship and two cruisers, and I had only managed to cripple one cruiser. More importantly they had somehow ended up behind my fleet, severly limiting my options and ability to return fire. On turn four Mark finished off three cruisers and a battleship, and I conceded. 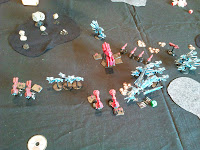 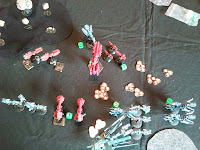 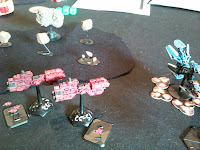 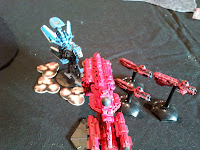 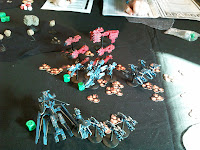 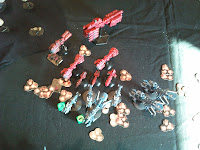 This is the first time I have played the Eldar under the BFG-R list, and they are definitely a big improvment on the original rulebook lists. My only concern is because all their weapons are very short ranged I can see many games against Eldar turning into rugby-scrums. But overall first impression, I like the BFG-R list and will try and arrange a few more games against them.
Posted by Than at 23:42