Defenders of the Crystal Citadel

The last of the Sierra Foxtrot armies I have on my painting table (at least for now...) is the Wolf-Knights, AKA the Defenders of the Crystal Citadel. 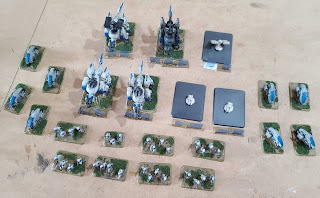 Unfortunately this force is still waiting on a last couple of models to arrive. I was hopeful they might get delivered while I was out of town last week, but it was not to be. So I have finished all the units I have on hand. Still to arrive are three more wolf-mechs (large bases in the image above are stand-ins), four transport shuttles for the infantry, and a pair of ground attack aircraft.

The Republic of the Crystal Citadel

When humanity started to explore the galaxy during the First Expansion, one of the most amazing discoveries they made was the Crystal Citadel - an ancient city filled with incredibly advanced technology, seemingly abandoned, and with little to no evidence about its builders. While the technology of the Citadel was so advanced as to make attempts to reverse-engineer it hopeless, it did contain automated manufacturing facilities that allowed its human occupants to build a number of devices from standard templates. The most famous of these are the Wolf-Mechs.

When the interstellar gates mysteriously ceased working during The Closure, the explorers investigating the Citadel were (as with all the colony worlds) cut off from Earth. For nearly two-hundred years the inhabitants of the Citadel had to fend for themselves, developing their own culture and shared history. When the gates re-opened at the start of the Second Expansion, they declined to re-join either any Terran state or the United Nations, instead declaring themselves an independent republic. The Republic of the Crystal Citadel has generally friendly relations with most human states (both on Terra and other former colonies) but it steadfastly maintains its independence.

The core of the Wolf-Knight force is (unsurprisingly) the Wolf-Mechs themselves. I've assembled these in three variants so far - cannon armed, missile launcher armed, and the Black-Wolf with medium missile launcher. 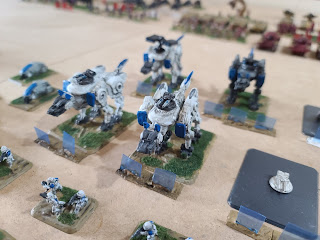 Supporting the wolves I so far have two additional unit types. First, the fast scout/recon Outriders; 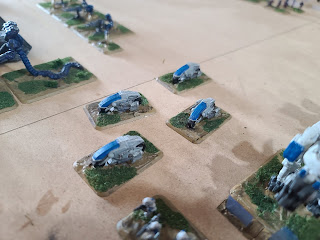 And second, the infantry units which I am calling Fusiliers; 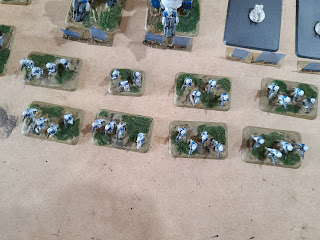 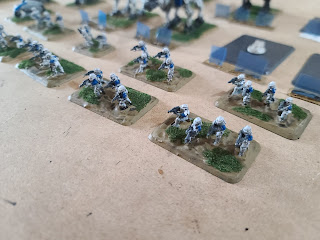 So the Wolf-Knights are now about two-thirds done, with the last models still on order. And that, plus a scout unit for the Southern Commonwealth and air-support for the Serpents (again, awaiting models on order) will complete my five Sierra Foxtrot armies.

After that the question becomes, what should my next gaming/miniature project be? At the moment 15mm sci-fi is still enthusing me, so I'm tempted by the notion of either creating one or two more SF armies (and I've even got my eye on some suitable model ranges) or adding unit types to the five existing armies (again, a few candidate models are being considered). But for the short term I think I might work on my terrain. I'm considering making a sparse, desert board, going for a look somewhere between US south-west, Mars, or World of Warcraft Badland zone.